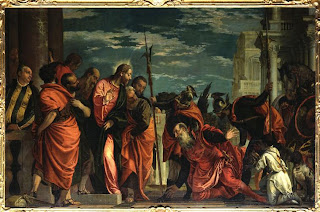 The third, fourth, fifth and sixth Sundays after Epiphany have the same Introit, Gradual, Offertory and Communion which testify to our Lord's divinity, to the fact that He worked miracles, and to the worship that we owe Him. In fact, throughout this time after Epiphany, the Church does not cease to manifest our Lord's divinity and therefore His Kingship over men. He is King over Jew and Gentile alike; and thus, following St. Matthew, the Church chooses a Gospel which records two miracles worked by our Lord to prove His divine Sonship to both. The first of them was on behalf of a leper, the second of a centurion. The one, as a member of the chosen race was bound by the law of Moses; the other, our Lord Himself implies, was not of the house of Israel. By one word of our Lord the leper is cleansed, and his cure is to be made known in the priest as "a testimony unto them" of the divinity of Christ (Gospel). The centurion, himself bears witness that our Lord is God, by his words of humility and trust, which the Church puts on our own lips daily in the Holy Mass. Moreover, he gives the same testimony by the argument which he builds up; taking his own office as an illustration, he affirms that our Lord has only to speak the word and illness will obey Him; thus he obtains the great miracle which he asked.

All nations will share in the heavenly feast in which the divinity of  our Lord will be the food of their souls. And just as in a banqueting hall all is warmth and light, so the pains of hell, the punishment of those who reject that divinity, are well described by the cold and the night which reign outside, the "exterior darkness" which contrasts with the dazzling brilliance ot the marriage chamber.

The two miracles mentioned in to-day's Gospel are put by St. Matthew at the end of the Sermon on the Mount, at which "the people were in admiration," and so they confirm the fact, that truly it was "from the mouth of God" that that doctrine proceeded, which caused so much wonder in the synagogue at Nazareth (Communion). Let us make acts of faith in our Lord's divinity, and that we may enter into His kingdom, let us by deeds of charity "heap upon the head" of those who hate us "coals of fire" (Epistle), that is, feelings of confusion inspired in them by our magnanimity, giving them no rest until they have righted the wrongs which they have done. In this way we shall make the mystery of the Epiphany a reality in our own lives; that of Christ's kingship over all men who unite themselves to Him by their common faith, and who must henceforth love each other as brethren. As St. Augustine says, "Charity is the effect of the grace of faith in Jesus Christ." 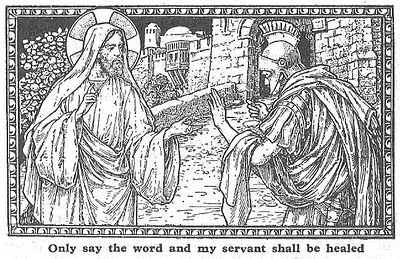 O God, who, by the fruitful Virginity of the Blessed Mary, hast given to mankind the rewards of eternal salvation, grant, we beseech thee, that we may experience Her intercession, by whom we received the Author of life, our Lord Jesus Christ, thy Son.
(Commemoration of the Blessed Virgin Mary)

Mercifully hear, we beseech thee, O Lord, the prayers of thy Church, that all oppositions and errors being removed, she may serve thee with a secure and undisturbed devotion.
(Against the persecutors of the church)

Continuation of the holy Gospel according to Matthew.
At that time, when Jesus was come down from the mountain, great multitudes followed him; and behold a leper came and adored him, saying: Lord, if thou wilt, thou canst make me clean. And Jesus stretching forth his hand, touched him, saying: I will, be thou made clean. And forthwith his leprosy was cleansed. And Jesus saith to him: See thou tell no man, but go show thyself to the priest, and offer the gift which Moses commanded for a testimony unto them. And when he had entered unto Capharnaum, there came to him a centurion, beseeching him, and saying: Lord, my servant lieth at home sick of the palsy, and sorely tormented. And Jesus saith to him: I will come and heal him. And the centurion making answer, said: Lord, I am not worthy that thou shouldst enter under my roof; but only say the word, and my servant shall be healed. For I also am a man under authority, having under me soldiers; and I say to this, Go, and he goeth, and to another, Come, and he cometh, and to my servant, Do this, and he doeth it. And when Jesus heard this, he marvelled, and said to them that followed him: Amen, I say to you, I have not found so great faith in Israel. And I say unto you, that many shall come from the east and the west, and shall sit down with Abraham, and Isaac, and Jacob, in the kingdom of heaven; but the children of the kingdom shall be cast out into the exterior darkness: there shall be weeping and gnashing of teeth. Jesus said to the centurion: Go, and as thou hast believed, so be it done to thee. And his servant was healed at that hour.
(St Matthew 8:1-13)
Posted by davidforster at 00:30