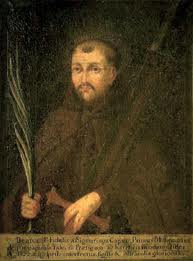 St Fidelis was born at Sigmaringen (Suabia) in 1577. He was at first a magistrate and took so much interest in the poor that he was called "the Advocate of the poor". He entered the seraphic Order of St. Francis, intimately united to God in continual prayer and work, he asked and obtained from Him to shed his blood for the Catholic faith. He was sent to the country of the Grisons where Protestant soldiers, fearing his influence, stabbed him to death at Sevis in 1622 (Collect).

This holy martyr who, in the Paschal Cycle, takes his place among the attendants of the risen Lord, shares with Him the felicity of the sons of God (Epistle).

The Gospel of the Martyr's Mass in Paschaltide is, like the Gospels after Easter, a passage from the last discourse pronounced by the Master on the eve of His death. On the symbolical vine, which is Jesus, there ure two sorts of branches which receive different treatment. Those without fruit are cut off and thrown into the fire. Those that bear fruit are on the contrary "carefully pruned in order that they may produce still more." That is why St. Fidelis was persecuted and put to death.

Let us obtain by the merits of this saint to be, like him, "so confirmed in faith and charity that we may be faithful in God's service unto death" (Collect).


Deus, qui beatum Fidelem, seraphico spiritus ardore succensum, in verae fidei propagation martyrii palma et gloriosis miraculis decorare dignatus es: ejus, quaesumus, meritis et intercessione, ita nos per gratiam tuam in fide et caritate confirma; ut in servitio tuo fideles usque ad mortem inveniri mereamur.
O God, who didst enkindle in the heart of blessed Fidelis a seraphic love, bestowing upon him the palm of martyrdom and the grace of working miracles in spreading the true faith; we beseech Thee, by his merits and intercession, to strengthen us by Thy grace, in faith and charity, that we may deserve to be found faithful in Thy service even unto death.
(Collect)