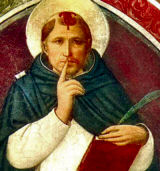 Born at Verona towards 1205 from Manichean parents, St. Peter as a child opposed the heretics. He entered the Order of St. Dominic. He preserved such purity of body and soul that he never committed a mortal sin.

We read in the Bull of his canonization: "A chosen cluster from the vine of the Church has filled with its generous juice the royal chalice: the branch from which it has been cut by the sword, was of those which most strongly adhered to the divine stem" (Gospel).

The ardour of his faith so enflamed him that he wished to die for it and his prayer was heard. "As he lived piously in Christ it was necessary that he should be persecuted" (Epistle) and an impious assassin sent by the Manichees murdered him on the road from Como to Milan in 1252.

Let us ask God to grant us, through the merits of St. Peter, a faith so strong (Collect) that it may obtain for us, after all the adversities of this life' Postcommunion) the joys of the resurrection (Epistle, Communion).

Thou hast protected me, O God, from the assembly of the malignant, alleluia: from the multitude of the workers of iniquity, alleluia, alleluia. * Hear, O God, my prayer, when I make supplication to Thee: free my soul from the fear of the enemy.
(Psalm 63:3,2 from the Introit of Mass)