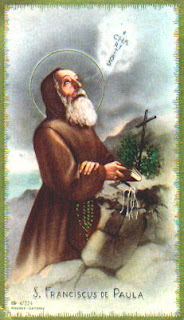 St. Francis was born at Paola in Calabria in 1416. When 13 years of age, . abandoning everything to acquire a treasure in the kingdom of heaven (Gospel), he retired into a desert and led such a holy life there that numerous disciples soon came to place themselves under his guidance. He then founded the Order to which in his humility he gave the name of Minims, that is to say, of the least in the house of God.


Despising everything to gain Christ, he endeavoured to resemble Him in His sufferings, so as to be able to participate in the glory of His resurrection n (Epistle). God, who exalts the humble (Collect), made him celebrated by numerous miracles and by the gift of prophecy. He died at the age of 91 in 1507.

Let us imitate the humilIty and penitence of St. Francis in order that we may attain the rewards promised to humble and mortified souls (Collect).

Justus ut palma florebit: sicut cedrus Libani multiplicabitur: plantatus in domo Domini: in atriis domus Dei nostri. * Bonum est confiteri Domino: et psallere nomini tuo, Altissime.
The just shall flourish like the palm-tree: he shall grow up like the cedar of Libanus: planted in the house of the Lord, in the courts of the house of our God.
(Psalm 91:13-14,2 from the Introit of Mass)

Deus, humilium celsitudo, qui beatum Franciscum Confessorem Sanctorum tuorum gloria sublimasti: tribue, quaesumus, ut, ejus meritis et imitatione, promissa humilibus praemia feliciter consequamur.
O God, who lifteth up the humble and hast raised Thy  blessed confessor Francis to the glory of the saints; grant, we beseech Thee, that by his merits and example, we too may attain the happiness which Thou hast promised to the humble of heart.
(Collect)