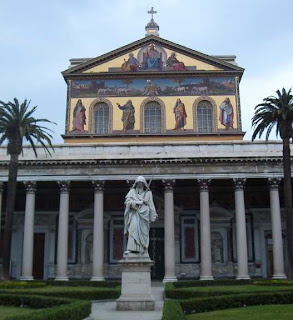 After the testimony to our Lord's resurrection given by the angels (Holy Saturday and Easter Sunday), and by the prince of the Apostles (Easter Monday), to-day's liturgy brings before us that of the Apostle of the Gentiles. So it is in the Basilica of St. Paul on the Via Ostia that the Church used to gather her new-born children round the tomb of this same apostle (Collect), there to teach them out of his mouth the words of Divine Wisdom. (Introit.)

The Epistle consists of a portion of the address in which St. Paul announced to the Jews of the Synagogue of Antioch in Pisidia the Resurrection of Christ, foretold by the Prophets and witnessed of by the Apostles.

The Gospel gives us a new proof of our Lord's resurrection, telling us of an appearance of Jesus in the Cenacle on the very day that He rose from the dead. Jesus makes His disciples touch Him, He eats in their presence und demonstrates from the Scriptures that it was necessary that Christ should die to save the world. The neophytes, "redeemed out of the hand of the enemy and united to God's own people " (Gradual), and all Christians with them, must, continues St. Paul, henceforth live, like 1 lie risen Christ, none but a heavenly life (Communion), and by their manner of living proclaim their faith in Christ (Collect).

Let us renew our faith in the risen Christ and show it by living, like Jesus, an entirely new life. 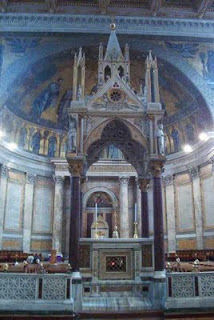 Aqua sapientiae potavit eos, alleluia: firmabitur in illis, et non flectetur, alleluia, et exaltabit eos in aeternum, alleluia, alleluia. * Confitemini Domino, et invocate nomen ejus: annuntiate inter gentes opera ejus.
He gave them the water of wisdom to drink, alleluia: it shall be made strong in them, and shall not be moved, alleluia, and it shall exalt them forever, alleluia, alleluia. * Give glory to the Lord, and call upon His name : declare His deeds among the nations.
(Ecclesiasticus 15:3-4 and Psalm 104:1 from the Introit of Mass)

Deus, qui Ecclesiam tuam novo semper foetu multiplicas: concede famulis tuis; ut sacramentum vivendo tueant, quod fide perceperunt.
O God, who dost increase Thy Church with an offspring ever renewed, grant to Thy servants, that they may retain in their lives the effect of the sacrament which they have received by faith.
(Collect)