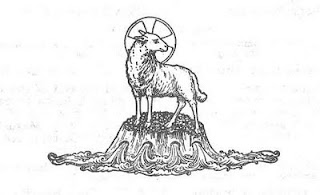 The Octave of Easter, during which formerly no servile work was done, was one continual feast. Each day the neophytes attended Mass at a Station, at which they received Holy Communion. In the evening they went to St. John Lateran for the office of Vespers.

On the first day of the week the Station was at St. Peter's, which contains the tomb of the head of the Church. We hear his voice in the Epistle, He proclaims to the world the Resurrection of Christ, of which he was witness. Likewise the Gospel, after describing the appearance of the risen Christ to the disciples of Emmaus, mentions His apparition to Peter on the very day of His Resurrection.

Receiving as we do, during these Easter festivities, one and the same sacrament, the milk of our souls which were born to the life of God and brought into the promised land by baptism (Introit), let us all be one in heart and soul (Postcommunion) in proclaiming together our faith in the risen Christ.

Introduxit vos Dominus in terram fluentem lac et mel, alleluia: et ut lex Domini semper sit in ore vestro, alleluia, alleluia. * Confitemini Domino, et invocate nomen ejus: annuntiate inter pontes opera ejus.
The Lord hath brought you into a land flowing with milk and honey, alleluia: that the law of the Lord may be ever in your mouth, alleluia, alleluia. Ps. Give glory to the Lord, and call upon His name: make known His deeds among the nations.
(Exodus 13:5,9 and Psalm 104:1 from the Introit of Mass)