From the St Andrew Daily Missal 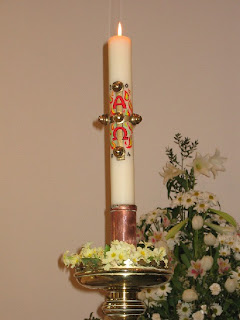 Paschaltide, beginning on Holy Saturday and ending on the Saturday after Pentecost, forms one single feast day in which are celebrated the mysteries of our Lord's Resurrection and Ascension and the descent of the Holy Ghost on the Church.

The date of Easter, by which all the movable feasts are regulated, has been the subject of more than one solemn conciliar decree. Since our Lord died and rose again at the time of the Jewish Passover, and since the Mosaic rites were to give place to these mysteries of which they were no more than the type, the Church has kept the Jewish method of reckoning, so far as Easter is concerned. Between the lunar year, which the Jews followed, and the solar year, there is a discrepancy of eleven days which results in a variation in the date of Easter between the limits of March 22nd and April 25th. The Council of Nicea decreed that the feast, should always be kept on the Sunday following the full moon after the 21st of March.

During Paschaltide the Church decorates her sanctuaries and joyous harmonies of the organ are poured forth. For the chant Asperges me at Mass is substituted the Vidi Aquam in which allusion is made to the waters of Baptism. Certain prayers like the antiphon Regina Caeli, are said standing as befits those who triumph, and during these forty days, fasting is forbidden by the Church who forgetting earth, raises the official chant of gladness which St. John tells us he heard in heaven. Introit, antiphon, verse, response, everything is followed by that enthusiastic refrain of which we are told in the Mass for Holy Saturday, "Alleluia, Alleluia, Alleluia."

At pontifical services, the subdeacon, after having chanted the Epistle on Holy Saturday, goes to the Prelate, and says to him this sentence, which recalls the joyful message of the angels to the shepherds of Bethlehem: "Reverendissime Pater, annuntio vobis gaudium magnum, quod est alleluia: Right Reverend Father, I bring you tidings of a great joy, which is alleluia." And then, the three alleluias are sung and repeated by all.

Until Ascension Day the Paschal candle, the symbol of our Lord's visible presence upon earth, shines on the congregation with its bright flame; and white vestments, the sign of joy and purity, are used. "Show in your conduct the innocence which is symbolized by the whiteness of your vestments," said Saint Augustine to the neophytes who were clothed in albs during the whole of the Easter octave. Formerly, during Paschaltide, the Church did not allow the celebration of the feasts of any saint of secondary rank, so as not to distract the attention of the faithful from the contemplation of our Lord in triumph The Collect A cunctis and the commemoration of all the saints are suppressed, and apostles and martyrs have a special Mass, being more intimately associated with the struggle and the victory of Christ. Especially the martyrs, in this part of the cycle, are the company of the Risen Lord.
Posted by davidforster at 02:30