St. Peter Canisius, Confessor and Doctor of the Church 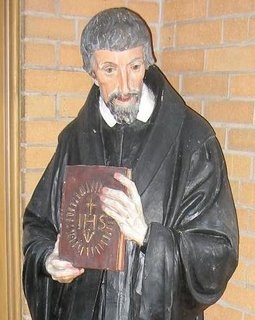 He was born at Nimegen, Holland, on May 8th, 1521; he died at Fribourg, Switzerland, on December 21th, 1597; was beatified by Pius IX; canonized and proclaimed Doctor of the Church by Pope Pius XI. His feast was extended to the universal Church on November 24th, 1926. It it fitting that this Dutch saint should be called the Apostle of Germany, the hammer of heretics, the Jerome and Augustine of his century, the defender of the Church against the gates of hell. By his eloquent preaching, controversy and books of piety, by the foundation of several colleges, by the missions entrusted to him by four Sovereign Pontiffs, he stopped the progress of Protestantism and caused Catholic life to flourish. He assisted as a theologian at the Council of Trent, and maintained the interests of the Church at the Diet of Augsburg and at the Conference of Worms. Profoundly humble, he refused the bishoprics of Vienna and Cologne. We owe to him the first catechism of Christian doctrine which suffices to entitle him to the gratitude of Catholics. He ended his days at the college of St. Michael, Fribourg, where pilgrims visit his room and pray at his tomb.

In medio Ecclesiae aperuit os ejus: et implevit eum Dominus spiritu sapientiae et intellectus: stolam gloriae induit eum. * Bonum est confiteri Domino: et psallere nomini tuo, Altissime.
In the midst of the Church the Lord opened his mouth: and He filled him with the spirit of wisdom and understanding: He clothed him with a robe of glory. * It is good to give praise to the Lord: and to sing to Thy name, O most High.
(Ecclesiasticus 15:5 and Psalm 91:2 from the Introit of Mass)
Deus, qui ad tuendam catho1icam fidem beatum Petrum Confessorem tuum virtute et doctrlna roborasti: concede propitius: ut ejus exemplis et monitis errantes ad salutem resipiscant, et fideles in veritatis confessione perseverent.
O God, who didst strengthen blessed Peter thy confessor in virtue and doctrine for the defence of the Catholic faith: grant in thy mercy, that by his example and teaching the erring may be brought to repentance, and the faithful persevere in confession of the truth. Through our Lord.Collect)