From to-day the Stational celebrations of Holy Week are held in Rome at the great basilicas. That of Wednesday is held at St. Mary Major, the largest and most celebrated sanctuary dedicated to the Blessed Virgin, whose sufferings the Church commiserates during these days.

The first passage from the Prophet Isaias bears on the Passion. The blood that dyes the Saviour's garments is His own most precious blood. Instead of crushing the people in His indignation, He suffers and dies for them.

The second passage foretells the principal features of the Passion with such remarkable precision that the Fathers of the Church speak of Isaias as the fifth Evangelist. It is "the Man of Sorrows" who "was led as a sheep to the slaughter and was dumb". "He was covered with wounds and reputed with the wicked." "He was bruised for our sins." "Cut off out of the land of the living, He had the ungodly to guard His sepulchre and the rich to bury Him after His death", "and by His bruises we are healed".

Justifying to the full His title of Saviour, "He became obedient unto death, even to the death of the cross" (Introit) as we are shown it to-day in the Gospel according to St. Luke.

Catechumens and Christian penitents alike, "we were in truth like sheep that had gone astray, each one having turned aside into his own way", and Jesus, "having the iniquity of us all laid on Him, has received in return a multitude of disciples" (Second Lesson). During the Easter festivities the souls of men will become reconciled to God in the sacraments of Baptism and Penance.

Renewing at Mass the mysteries of the Passion of our Lord, let us pray "to be delivered by His merits from the power of the enemy and to obtain the grace of His resurrection" (First and Second Collects, and Secret). 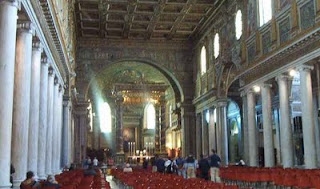 In nomine Jesu omne genu flectatur, caelestium, terrestrium, et infernorum: quia Dominus factus est obediens usque ad mortem, mortem autem crucis: Ideo Dominus Jesus Christus in gloria est Dei Patris. * Domine, exaudi orationem meam : et clamor meus ad te veniat.
In the name of Jesus let every knee bow, of those that are in heaven, on earth, and under the earth; for the Lord became obedient unto death, even to the death of the cross. Therefore our Lord Jesus Christ is in the glory of God the Father. * O Lord, hear my prayer: and let my cry come to Thee.
(Philippians 2:10,8,11 and Psalm 101:2 from the Introit of Mass)

Praesta, quaesumus, omnipotens Deus: ut, qui nostris excessibus incessanter affligimur, per unigeniti Filii tui passionem liberemur.
Grant, we beseech Thee, O almighty God, that we who are continually afflicted by reason of our excesses, may be delivered through the passion of Thine only-begotten Son.
(First Collect)