Low Sunday or Octave of Easter

This Sunday is called Quasimodo, from the first words of the Introit, or Dominica in Albis (post albas depositas) from the fact that on this day the newly baptized had laid aside their white vestments, or Pascha Clausum because it finishes the Easter Octave, or again, Low Sunday, perhaps in contrast to the great feast of the week before.

To teach those who, in baptism, have just been born to the life of God, the generosity with which they ought to bear testimony to Christ, the Church leads them to the basilica of the martyr Saint Pancras, who when only twelve years old offered to Christ the testimony of his blood. Christians must stand firm, resting on their faith in Christ,the risen Son of God. St. John tells us that this is the faith that overcomes the world, for it enables us to resist all efforts to make us fall (Epistle). Thus it is important that it should have a firm foundation, which the Church gives us in to-day's Mass. St. John says in the Epistle that this faith is founded upon the witness of the Father, who at our Lord's baptism (with water) proclaimed Him His Son; of the Son who on the cross (by His blood) showed Himself as the Son of God; and of the Holy Ghost, descending on the Apostles on the day of Pentecost, according to our Lord's promise, confirmed what Christ had said about His resurrection and His divinity, dogmas which the Church, guided by the Holy Ghost, never ceases to proclaim.

Our faith rests also on the testimony of angels who announced our Lord's rising from the dead (Offertory), but it is based chiefly on His appearances to His apostles. Further, the Gospel shows us how Christ, appearing twice in the Cenacle, overcame the unbelief of St. Thomas, praising those who, not having seen, should yet believe.

Let us believe in Jesus risen from the dead, and in the presence of the Blessed Sacrament, let us repeat St. Thomas' cry of faith and humility: "My Lord and my God." By our steadfast faith and our blameless conduct let us bear witness to our Lord Jesus Christ, before an indifferent world.

Praesta, quaesumus, omnipotens Deus: ut, qui paschalia festa peregimus; haec, te largiente, moribus et vita teneamus.
Grant, we beseech Thee, O almighty God, that we who have celebrated the Paschal solemnity, may by Thy bounty show forth its effects in our life and conversation.
(Collect) 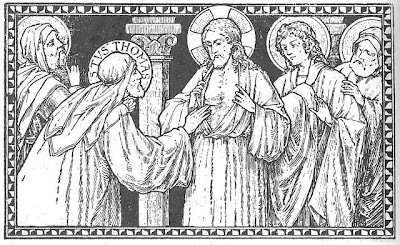 The continuation of the Holy Gospel according to John.
At that time, when it was late that same day, the first of the week, and the doors were shut, where the disciples were gathered together for fear of the Jews, Jesus came, and stood in the midst and said to them: "Peace be to you." And when He had said this, He showed them His hands and His side. The disciples therefore were glad, when they saw the Lord. He said therefore to them again: "Peace be to you: as the Father hath sent Me, I also send you." When He had said this, He breathed on them, and He said to them, "Receive ye the Holy Ghost: whose sins you shall forgive, they are forgiven them, and whose sins you shall retain, they are retained." Now Thomas, one of the twelve, who is called Didymus, was not with them when Jesus came. The other disciples therefore said to him: We have seen the Lord. But he said to them: Except I shall see in His hands the print of the nails, and put my finger into the place of the nails, and put my hand into His side, I will not believe. And after eight days, again His disciples were within, and Thomas with them. Jesus cometh, the doors being shut, and stood in the midst, and said: "Peace be to you." Then He saith to Thomas: "Put in thy finger hither, and see My hands, and bring hither thy hand, and put it into My side; and be not faithless, but believing." Thomas answered, and said to him: My Lord, and my God. Jesus saith to him: "Because thou hast seen Me, Thomas, thou hast believed: blessed are they that have not seen and have believed." Many other signs also did Jesus in the sight of His disciples which are not written in this book. But these are written, that you may believe that Jesus is the Christ the Son of God; and that, believing, you may have life in His name.
(St John 20:19-31)
Posted by davidforster at 00:30