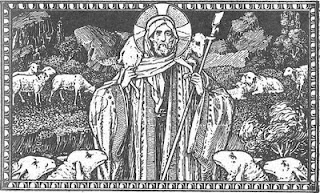 To-day is called "Good Shepherd Sunday". For, in the epistle, St. Peter himself, made by the risen Lord head and chief Pastor of His Church, tells us that Christ is the shepherd of our souls, which were like wandering sheep They are gathered round Him who came to give His life for them. The gospel relates the touching parable of the good shepherd who defends his sheep against the wolf, and protects them from death (Collect); and foretells that the heathen will come to join the Jews of the Old Law and to form with them one only Church and flock, under one shepherd.

These our Lord recognizes as His sheep and like the disciples at Emmaus, whose eyes were opened at the breaking of the bread, at the altar when the priest consecrates the Host which is the memorial of our Lord's passion, they acknowledge that Christ is "the Good Shepherd who gives His life that He may feed His sheep with His Body and Blood" (St. Gregory). Raising their eyes to Him (Offertory), they pour forth to Him their gratitude for His great mercy (Introit).

"It was in those days," says St. Leo, "that the Holy Ghost was bestowed upon all the apostles by our Lord's breathing upon them, and that the blessed apostle Peter, raised above the rest, having already received the keys of the kingdom, saw the care of the Lord's flock committed to his charge" (Second nocturn). This was the first step in the founding of the Church.

Let us press round the divine Shepherd of our souls, hidden in the Eucharist and whose visible representative is the Pope, Pastor of the Universal Church.

Deus, qui in Fllii tui humilitate jacentem mundum erexisti, fidelibus tuis perpetuam concede laetitiam; ut, quos perpetuae mortis eripuisti casibus, gaudiis facias perfrui sempiternis.
O God, who by the humility of Thy Son hast raised up a fallen world, grant to Thy faithful people abiding joy; that those whom Thou hast delivered from the perils of eternal death, Thou mayest cause to enjoy endless happiness.
(Collect)

Continuation of the holy Gospel according to St. John.
At that time Jesus said to the Pharisees: I am the good shepherd. The good shepherd giveth his life for his sheep. But the hireling, and he that is not the shepherd, whose own the sheep are not, seeth the wolf coming and leaveth the sheep and flieth: and the wolf catcheth and scattereth the sheep: and the hireling flieth, because he is a hireling, and he hath no care for the sheep. I am the good shepherd: and I know Mine, and Mine know Me, as the Father knoweth Me, and I know the Father : and I lay down My life for My sheep. And other sheep I have that are not of this fold: them also I must bring, and they shall hear My voice, and there shall be one fold and one shepherd.
(St. John 10:11-16)
Posted by davidforster at 00:30