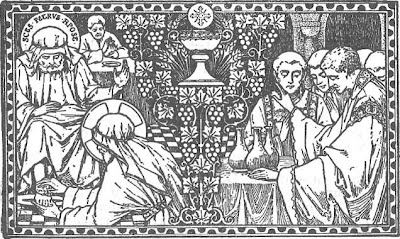 The Station is held at St. John Lateran, originally called the Basilica of Saint Saviour.

The Liturgy of Maundy Thursday is full of memories of the Redemption. It provided formerly for the celebration of three Masses: the first for the reconciliation of public Penitents, the second for the consecration of the holy oils, and the third for a special commemoration of the institution of the Holy Eucharist at the Last Supper. This last Mass is the only one that has been preserved, and at it the Bishop, attended by twelve Priests, seven Deacons and seven Subdeacons, blesses the holy oils in his Cathedral church.

THE RECONCILIATION OF PUBLIC PENITENTS

Sinners who had undergone a course of penance were granted on this day "the abundant remission of their sins", "which were washed away in the blood of Jesus". Dying with Christ, they were "cleansed of all their sins, and clad in the nuptial robe they were admitted once more to the banquet of the Most Holy Supper".

THE BLESSING OF THE HOLY OILS

This blessing took place with a view to the baptism and confirmation of the catechumens during Easter night. The bishop exorcised the oil, praying God "to instil into it the power of the Holy Ghost", so that "the divine gifts might descend on those who were about to be anointed". (Collects for Blessing of Holy Oil).

Before the prayer Per quem haec omnia there used to be a form of blessing of the good things of the earth, with mention of their different kinds (fruits, milk, honey, oil, etc.) of which we still find examples in the Leonine Sacramentary. Of this form there remains nothing in the Canon of the Mass except the conclusion, which on Holy Thursday retains its natural meaning, since it immediately follows the blessing of the holy oils.

The oil of the sick, which is the matter of the Sacrament of Extreme Unction, is the first to be blessed, before the Pater. Formerly this used also to be blessed on other days.

The Holy Chrism, which is the matter of the Sacrament of Confirmation, is the noblest of the holy oils, and the blessing of it takes place with greater pomp after the clergy have communicated. It is used for the consecration of bishops, in the rite of baptism, in the consecration of churches, altars and chalices, and in the baptism or blessing of bells.

The third holy oil, which is blessed immediately after, is that of the catechumens. It is used to anoint the breast and between the shoulders of the person to be baptized, for the blessing of baptismal fonts on Holy Saturday and on the Vigil of Pentecost, at the ordination of priests, at the consecration of altars and for the coronation of kings and queens.

"Oil", says St. Augustine, "signifies something great." Through the ages and in many a land it has always played a mystical and religious part. Soothing and restoring by its very nature, it symbolizes the healing wrought by the Holy Ghost (Extreme Unction); a source of light, it denotes the graces of the Holy Ghost which enlighten the heart; flowing and penetrating it represents the infusion of the Holy Spirit into souls (Baptism, Confirmation); softening in its effects, it shows forth the action of the Holy Ghost, who bends our rebellious wills and arms us against the enemies of our salvation. The Holy Ghost is especially represented by the olive oil, according to the Blessings of Oil and of Palms, because the dove, a symbol of the Holy Ghost carried an olive branch in her beak; because the Holy Ghost came down upon Christ the anointed One; and because the olive branches cast by the Jews in our Lord's path foreshadowed the outpouring of the Holy Spirit which was to be given to the Apostles at Pentecost. The balm which is added to the oil to make the sacred Chrism signifies by its sweet perfume the good odour of all Christian virtues. Also it preserves from corruption; another respect in which it is a symbol of supernatural grace that protects us from the contagion of sin.(Catechism of the Council of Trent).

The Church, which commemorates throughout the year in the Holy Eucharist all the mysteries of our Lord's life, to-day lays special stress on the institution of that Sacrament and of the Priesthood. This Mass carries out more than any other the command of Christ to His priests to renew the Last Supper, during which He instituted His immortal presence among us at the very moment His death was being plotted. The Church, setting aside her mourning to-day, celebrates the Holy Sacrifice with joy. The crucifix is covered with a white veil, her ministers are vested in white, and the bells are rung at the Gloria in excelsis. They are not rung again until Holy Saturday.

St. Paul tells us in the Epistle that the Mass is a "memorial of the death of Christ". The Sacrifice of the Altar is necessary if we are to partake in the Victim of Calvary and share in His merits. And the Eucharist, which derives all its virtue from the Sacrifice of the Cross, makes it universal as regards time and space in a sense unknown so far. To love the Blessed Sacrament is "to glory in the cross of our Lord Jesus Christ" (Introit). Christ takes on Himself to perform the ablutions prescribed by the Jews during the supper (Gospel), to show forth the purity and charity that God requires of those who desire to communicate for, as in the case of Judas (Collect), "whosoever eats this bread unworthily is guilty of the body and of the blood of the Lord " (Epistle).

After the Mass the altar is stripped in order to show that the Holy Sacrifice is interrupted and will not be offered again to God until Holy Saturday. The priest therefore has consecrated two hosts, for on Good Friday the Church refrains from renewing on the altar the sacrifice of Calvary.

On this Holy Thursday, when the Epistle and Gospel describe for us the details of the institution of the priesthood and the Eucharistic sacrifice, let us receive from the priest's hands that Holy Victim who offers Himself upon the altar, and in this holy manner fulfil our Easter duty.

Nos autem gloriari oportet in cruce Domini nostri Jesu Christi: in quo est salus, vita, et resurrectio nostra: per quem salvati, et liberati sumus. * Deus misereatur nostri, et benedicat nobis: illuminet vultum suum super nos, et misereatur nostri.
But it behoves us to glory in the cross of our Lord Jesus Christ : in whom is our salvation, life, and resurrection : by whom we are saved and delivered. * May God have mercy on us, and bless us: may He cause the light of His countenance to shine upon us; and may He have mercy on us.
(Galatians 6:14 and Psalm 66:2 from the Introit of Mass)

Deus, a quo et Judas reatus sui poenam, et confessionis suae latro praemium sumpsit, concede nobis tuae propitiationis effectum; ut, sicut in passione sua Jesus Christus Dominus noster diversa utrisque intulit stipendia meritorum; ita nobis, ablato vetustatis errore, resurrectionis suae gratiam largiatur.
O God, from whom Judas received the punishment of his guilt, and the thief the reward of his confession, grant us the effect of Thy clemency: that as our Lord Jesus Christ in His passion gave to each a different recompense according to his merits, so may He deliver us from our old sins and grant us the grace of His resurrection.
(Collect)

Continuation of the Holy Gospel according to John
Before the festival day of the pasch, Jesus knowing that his hour was come, that he should pass out of this world to the Father: having loved his own who were in the world, he loved them unto the end. And when supper was done, (the devil having now put into the heart of Judas Iscariot, the son of Simon, to betray him,) Knowing that the Father had given him all things into his hands, and that he came from God, and goeth to God; He riseth from supper, and layeth aside his garments, and having taken a towel, girded himself. After that, he putteth water into a basin, and began to wash the feet of the disciples, and to wipe them with the towel wherewith he was girded. He cometh therefore to Simon Peter. And Peter saith to him: Lord, dost thou wash my feet? Jesus answered, and said to him: What I do thou knowest not now; but thou shalt know hereafter. Peter saith to him: Thou shalt never wash my feet. Jesus answered him: If I wash thee not, thou shalt have no part with me. Simon Peter saith to him: Lord, not only my feet, but also my hands and my head. Jesus saith to him: He that is washed, needeth not but to wash his feet, but is clean wholly. And you are clean, but not all. For he knew who he was that would betray him; therefore he said: You are not all clean. Then after he had washed their feet, and taken his garments, being set down again, he said to them: Know you what I have done to you? You call me Master, and Lord; and you say well, for so I am. If then I being your Lord and Master, have washed your feet; you also ought to wash one another's feet. For I have given you an example, that as I have done to you, so you do also.
(St John 13:1-15)

THE WASHING OF THE FEET


After the stripping of the altars, the clergy at a convenient hour meet to perform the ceremony known as the Mandatum. The prelate or priest puts on over the amice and alb a violet stole and cope. Then the deacon, in white vestments (as is also the subdeacon) sings the Gospel Ante diem festum Paschae (as above) in the usual way. The officiating priest then removes his cope, girds himself with a cloth and, assisted by his ministers begins the washing of the feet of thirteen clerics or thirteen poor people chosen for the ccremony. It is obvious that the number was originally twelve, in remembrance of the twelve Apostles. According to a tradition, the alteration was made by St. Gregory the Great. This holy Pope, when washing the feet of twelve poor men, noticed one more, of a very beautiful countenance. When he tried to know who he was, after the ceremony, the mysterious poor had disappeared. St. Gregory believed it was an angel or our Lord himself. The official liturgical book known as the "Ceremonial of the Bishops" prescribes the number of thirteen.

The officiating priest kneels before each one of them, washes, wipes and kisses the foot presented, using the cloth tendered by the deacon. Meanwhile a number of antiphons are sung.

Mandatum novum do vobis: * ut diligatis invicem, sicut dilexi vos, dicit Dominus.  Ps. Beati immaculati in via: qui ambulant in lege Domini. Mandatum novum.
A new commandment I give unto you: That you love one another, as I have loved you, says the Lord. Ps. Blessed are the undefiled in the way: who walk in the law of the Lord. A new commandment.
(From John 13:34 and Psalm 118:1)
Posted by davidforster at 00:30