Station at the Twelve Apostles

On this day the Church used to gather together in the Church of the Twelve Apostles, witnesses of the risen Christ, her new-born children, in order that they might sing the praises of the Lord, Who had associated them with His triumph (Introit, Communion). In this Stational basilica are the bodies of St. Philip and St. James.

The Gospel tells of the appearance of Jesus to Magdalen, who was the first to inform the Apostles of the disappearance of our Lord's body, and who, after seeing the risen Christ, was deputed by Him to proclaim to them the double mystery of the Resurrection and the Ascension.

The Epistle tells of one of the first seven deacons, called Philip. He baptizes a heathen eunuch, who in a transport of joy preaches everywhere the Gospel of Jesus.

This is what the Church has done for the catechumens "who have just been born again in the font of baptism" (Collect). "God hath made the tongues of those infants eloquent" (Introit), and by their faith and their good actions (Collect) they sing the triumph of Jesus over death (Alleluia) and over their own souls (Communion).

Let us remember that by baptism we have become united in one and the same faith to the risen Christ (Collect), whose Father is now our Father. 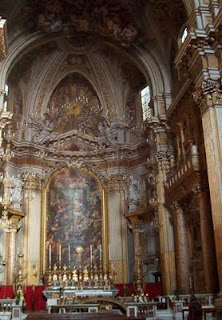 Deus, qui diversitatem gentium in confessione tui nominis adunasti: da, ut renatis fonte baptismatis una sit fides mentium, et pietas actionum.
O God, who hast united the various nations in the confession of Thy name, grant that those who have been born again of water in baptism may be one in faith and one in deed in holiness of life.
(Collect)