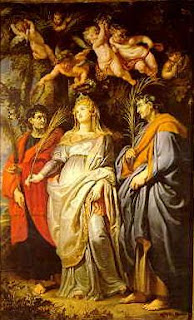 Nereus and Achilleus, officers of the household of Flavia Domitilla, a niece of the Emperors Titus and Domitian, were baptized by St. Peter. The Gospel praises their faith when it praises that of the officer who obtained the cure of his son and believed in Jesus.

These saints having inspired Domitilla with the resolution to consecrate her virginity to God, Aurelianus, her betrothed, accused them all three of being Christians. Out of hatred for Christ, they were put to death under the Emperor Trajan at Terracina (about 100 A. D.). Their bodies rest in Rome in the church of St. Nereus and Achilleus. This church was stational on Monday in Holy Week, but the bad state of the building caused the station to be transferred to St. Praxedes's, in the XIIIth century. St. Nereus's was restored in the XVIth.

St. Pancras was arrested in Rome at the age of fourteen and put to death towards 275, under Diocletian, for having refused to sacrifice to the gods. His constancy earned for him a place among the saints whose joy he shares (Epistle, Communion).

Ecce oculi Domini super timentes eum, sperantes in misericordia ejus, alleluia: ut eripiat a morte animas eorum: quoniam adjutor, et protector noster est, alleluia, alleluia. * Exsultate, justi, in Domino: rectos decet collaudatio.
Behold the eyes of the Lord are on them that fear Him, hoping in His mercy, alleluia : to deliver their souls from death : for He is our helper and protector, alleluia, alleluia. * Rejoice in the Lord, ye just: praise becometh the upright.
(Psalm 32:18-20,1 from the Introit of Mass)