13th May, St Robert Bellarmine, Bishop, Confessor and Doctor of the Church

St. Robert Bellarmine, Bishop, Confessor and Doctor of the Church 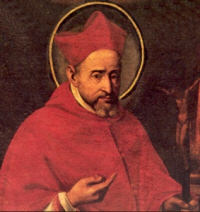 Successively professor of theology and preacher at Louvain (1569-1576), director of the course of controversy in Rome, where St. Aloysius Gonzaga was his penitent, provincial of the Jesuits at Naples, sent by Sixtus V on a diplomatic mission to France, Bellarmine was raised to the cardinalate in spite of his unwillingness in 1599. Clement VIII alleged as motive for this promotion that his equal in learning was not at that time to be found in the Church. Apart from the three years he spent in Capua as its archbishop, he passed his life in Rome, where he rendered signal services to Clement VIII, Paul V and Gregory XV. By his controversial books he dealt formidable blows to Protestantism, while by his catechism, translated into forty languages, he spread the knowledge of Christian doctrine in all countries of the world. As a religious he shone by his angelic purity, humility and obedience, and as bishop he was a model of watchful care and charity to the poor. Towards the end of his life he obtained leave of the Pope to retire to the noviciate of St. Andrew, the cradle of his religious life, where he prepared for a happy and holy death.

Deus qui ad errorum insidias repellendas et Apostolicae Sedis jura propugnanda, beatum Robertum Pontificem tuum atque Doctorem mira eruditione et virtute decorasti: ejus meritis et intercessione concede: ut nos in veritatis amore crescamus et errantium corda ad Ecclesiae tuae redeant unitatem.
O God, who didst fill blessed Robert, Thy bishop and doctor, with wondrous learning and virtue that he might break the snares of errors and defend the Apostolic See: grant us by his merits and intercession, that we may grow in the love of truth and that the hearts of those in error may return to the unity of Thy Church.