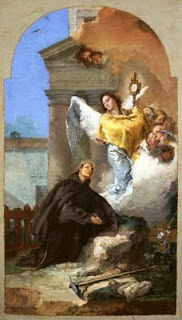 Born in the kingdom of Aragon in Spain, St. Paschal in his childhood tended sheep. At 20, he entered as a lay-brother the Order of St. Francis where he became a model of the greatest austerity, of the most Complete obedience and of the most perfect seraphic poverty (Epistle).

His meditation on the things of God (Introit) was so profound that he was absorbed into ecstasies of love. It gave him a knowledge of divine things which enabled him to speak about the most obscure mysteries of the faith. He was especially celebrated for his devotion to the Blessed Sacrament (Collect), and spent hours in prayer before the tabernacle. Pope Leo XIII declared him protector of all Eucharistic Congresses and works. Like "the servants who await the coming of their master" (Gospel), St. Paschal awaited the coming of Jesus at the exact hour he had foretold, May 17th, 1592, on Pentecost, the anniversary of his birth, and he ascended to heaven following the risen Christ.

Let us imitate the love of St. Paschal for the Eucharist "so that we may deserve to draw from this banquet the same abundance of graces which he found there " (Collect).


Os justi meditabitur sapientiam, et lingua ejus loquetur judicium; lex Dei ejus in corde ipsius. * Noli aemulari in malignantibus: neque zelaveris facientes iniquitatem.
The mouth of the just shall meditate wisdom, and his tongue shall speak judgement: the law of his God is in his heart. * Be not emulous of evildoers: nor envy them that work iniquity.
(Psalm 36:30-31,1 from the Introit of Mass)
Deus, qui beatum Paschalem Confessorem tuum mirifica erga Corporis et Sanguinis tui sacra mysteria dilectione decorasti: concede propitius; ut, quam ille ex hoc divino convivio spiritus percepit pinguedinem, eamdem et nos percipere mereamur.
O God, who didst imbue blessed Paschal, Thy confessor, with wondrous love for the sacred mysteries of Thy Body and Blood : vouchsafe that we may draw from this divine banquet the same spiritual riches as he received.