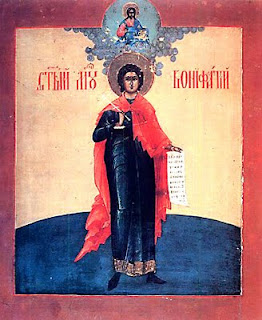 Arrested at Tarsus, Boniface "bore himself with much fortitude in presence of his torturers" (Epistle). They tore his body with iron hooks, they thrust pointed reeds under his nails, and poured molten lead into his mouth. He was beheaded at Tarsus on May 14th, towards 275, under Emperor Galerius. His remains were brought to Rome and deposited on Mount Aventine, in the church which took first his name, and later on that of St. Alexius.