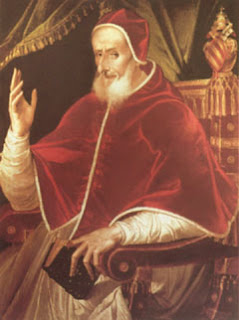 Pius, born at Bosco in Lombardy, entered, at the age of fourteen, the Order of Preachers. As bishop, cardinal and pope (Introit, Epistle, Communion), he put to profit the talents entrusted to him by God (Gospel).

His pontificate, although short, was one of the most glorious of the sixteenth century. Protestantism had proclaimed the reformation and Islam threatened the West. To remedy the ills under which Christendom groaned, St. Pius V enforced obedience to the decrees of the Council of Trent, published a new edition of the Missal and Breviary and obtained, by the prayers he asked for, the glorious victory won by the Christian lorces at Lepanto in 1571. He instituted, on that occasion, the feast of our Lady of Victories which became, later on, the feast of the most Holy Rosary. 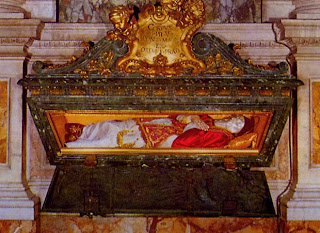 Statuit ei Dominus testamentum pacis, et principem fecit eum: ut sit illi sacerdotii dignitas in aeternum. * Memento, Domine, David, et omnis mansuetudinis ejus.
The Lord made to him a covenant of peace, and made him a prince: that the dignity of the priesthood should be to him for ever. * O Lord, remember David: and all his meekness.
(Ecclesiasticus 45:30 and Psalm 131:1 from the Introit of Mass)


Deus, qui ad conterendos Ecclesiae tuae hostes, et ad divinum cultum reparandum, beatum Pium Pontificem maximum eligere dignatus es: fac nos ipsius defendi praesidiis, et ita tuis inhaerere obsequiis: ut, omnium hostium superatis insidiis, perpetua pace laetemur.
O God, who for the overthrowing of the enemies of Thy Church and for the restoring of the beauty of Thy worship, didst choose blessed Pius as supreme Pontiff: grant that we may be defended by his patronage and so cleave unto Thy service, that overcoming all the snares of our enemies, we may rejoice in Thy eternal peace.