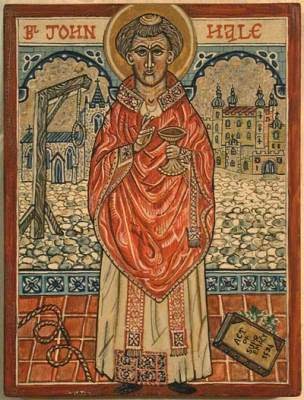 A secular priest, Vicar of Ilseworth, who suffered martyrdom, at the same time as the Holy Carthusians. Died at Tyburn, 4th May 1535. Beatified 1888 by Pope Leo XIII.

From the Catholic Encyclopaedia: "With them died a secular priest, Blessed John Hale, LL.B., Fellow of King's Hall, Cambridge, and Vicar of Isleworth, Middlesex, since 13 August, 1521. He took this living in exchange for the Rectory of Cranford, Middlesex, which he had held since 11 September, 1505. There is nothing to identify him with the Rector of Chelmsford of 1492. He may possibly be the person of this name who became scholar of Eton in 1485. He was indicted 20 April, 1535, with the perpetual curate of Teddington, Middlesex, named Robert Feron, for offences against 25 Henry VIII, c. 22. Both pleaded guilty and were condemned; but Feron was pardoned. Hale was the fourth to suffer."

Let the saints bless Thee, O Lord; they shall speak of the glory of Thy kingdom, alleluia, alleluia. * I will extol Thee, O God my King: and I will bless Thy name for ever; yea, for ever and ever.
(Psalm 144:10-11,1 from the Introit of Mass)